A hit night of music and entertainment by a handful of the best rock bands around, “Hunny, I Rocked the Bunny” was organized by Better’fly and held at The Quadrangle on April 26, 2014. The aim of the event was to help Food Blessed, a local NGO, by raising awareness and funds to contribute to feeding hungry mouths across the country.

Over 250 people were there to witness some great music hosted by Wissam Kamal “The Doctor” and performed by Rabii Hajjar & Mo Jouzou, Sunday Arcade, Leakin Engine, The Butterfly Ft. Tanya Rizkala Agostine from Epic, Layer Cake, Chained Reaction Band,  surprise guests DANY DEAïBESS & Friends (Rabih Deaibess of Blaakyum, Rudy Faress of Roswell, Marcelino Said of Ostura), and BandAge who all gave their best performances and entertained the crowd well into the night.

Everyone was enjoying their time as the bands played from the bottom of their hearts representing a united front against hunger in Lebanon. The show was a perfectly positive outpour of support and everything at the event went according to plan thanks to the staff and organizers, with special thanks to Mr. Tony Rizkallah for his support. [See Photo Gallery of the event here.]

The funds that were raised through “Hunny, I Rocked the Bunny” were put together along with over 30 volunteers to reach the final goal: Over 100 food packages to be delivered to the less fortunate around Lebanon. On the occasion of World Hunger Day, May 28th, the Better’fly gang joined forces with the Food Blessed team and many other helping hands for a fun-filled day spent with new friends.

The group of volunteers was full of energy and ready to organize and pack the food into boxes. There was dance music playing and it was a great experience for everyone involved especially since most of the volunteers had just met that very same day. They all formed a quick and sturdy bond and they worked hard to pack over 100 boxes full of canned goods and other food items to be handed out to the less fortunate. As one of the volunteers put it, “It felt great! I felt that we shall do it again and again… that kinda feeling!” 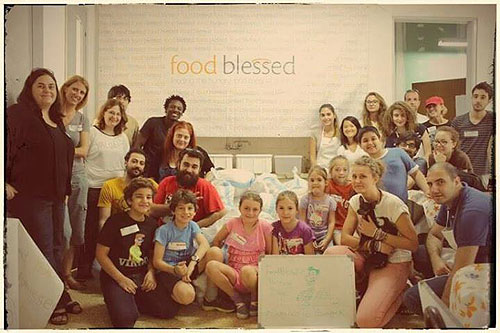